There is no argument to the fact that the world was brought down to its knees by the COVID-19 disease. Who would have thought that an invisible microbe will lock all humans in the world into their homes, bring the great economies to a screeching halt and even cause years-long depression in the global economy?

Even developed countries with advanced healthcare systems stumbled in the wake of the pandemic. Critics pointed out that it shed light on the flaws of the so-called foolproof medical systems.

When even the greatest superpowers were shocked beyond words, a small South Indian state successfully flattened the Coronavirus curve. Kerala, a famous tourist destination, adopted exemplary measures to contain the spread that elicited appreciation. International news agencies like Washington Post, The Guardian, BBC News, The Tribunal, and so on publicized the success story of this small state in the Indian subcontinent.

Kerala was a potential hotspot due to its demographic peculiarity. 33 million of its citizens are expatriates in foreign lands. The land well known for its serene backwaters, exotic beaches, and attractive hill stations attracts more than a million tourists annually. Hence the chances of COVID-19 spread were high. Sure enough, Kerala became the first state to report a case in India.

Nevertheless, the quick response by the state government helped to prevent the community spread of the disease. A state with the highest literacy rate in India, Kerala and its people demonstrated how to effectively curb the disease. The selfless service of health professionals helped to provide necessary treatment to the affected and quarantined. 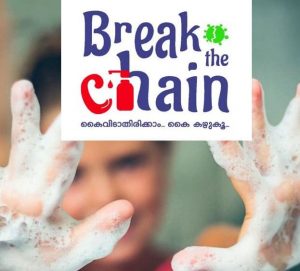 The success of the state’s war against COVID-19 has three factors to thank: strong public health system, clear risk communication, and community participation. An experience of containing the Nipah outbreak in 2018 also prepared the state to respond to emergency situations swiftly.

The state quickly responded to the pandemic by declaring a lockdown. Then through aggressive testing and contact tracing, it identified the affected. Those who were suspected to have come in contact with a patient were quarantined. With the help of dedicated primary health center professionals, the tedious and grueling task of constant monitoring was accomplished. The police force made sure that the lockdown was strictly observed by everyone and any aberrations were seriously dealt with.

Within weeks, the results started showing. From the state with most COVID cases, Kerala climbed down the rung and became one of the least affected. The state has currently a spread rate of less than half of the national average.

Praises for the proactive response

The successful strategy of Kerala invited world attention. International news agencies prepared reports highlighting the ‘Kerala model’. Praises poured in from all parts of the world through social media platforms for the socially aware citizens and proactive government.

Henk Bekedam, the World Health Organization's representative in India, appreciated the efforts of Kerala and attributed the success to its prompt response and investment in emergency preparedness.

Unfortunately, some tourists from Europe tested positive during this time in Kerala. Brian Lockwood, a 57-year-old British national, was one among them. He is of high praise for the care he got in Kerala. Mr. Lockwood remarked that the world-class medical facilities and dedicated healthcare professionals in Kerala helped him recover from the deadly disease. He also observed that he would not have received better treatment in his home country.

Prepared for the worst

In the wake of the pandemic, Kerala— a beautiful land renowned among travelers from around the world as ‘God’s own country’—has lived up to the sobriquet. It held its ground and showed that we can overcome the catastrophe.

The Health Minister of the state has assured that the state is ready if an emergency should occur again. Indeed the state is prepared to face a second wave of the pandemic if it arises.

Temples In Kumarakom:  Places To Get Immersed In Spirituality

The Best Season for a Honeymoon Trip to Kerala