For most, the things that come to mind while thinking about Singapore are the impressiveness of Supertree groves, the opulence of Marina bay sands, or the hugeness of the Singapore flyer. The international travelers will concur with the fact that these are some of the exciting sights. But very few will fail to mention that there is one other factor that makes Singapore travel exciting: the stunning bridges of the land. There is something alluring, even artistic, about the bridges in Singapore. They are much more than just a connector between two landmasses. One cannot help but stand in awe at the architectural brilliance of these constructions.

Below is the list of 11 spectacular bridges that you will find nowhere else in your international tour but Singapore. 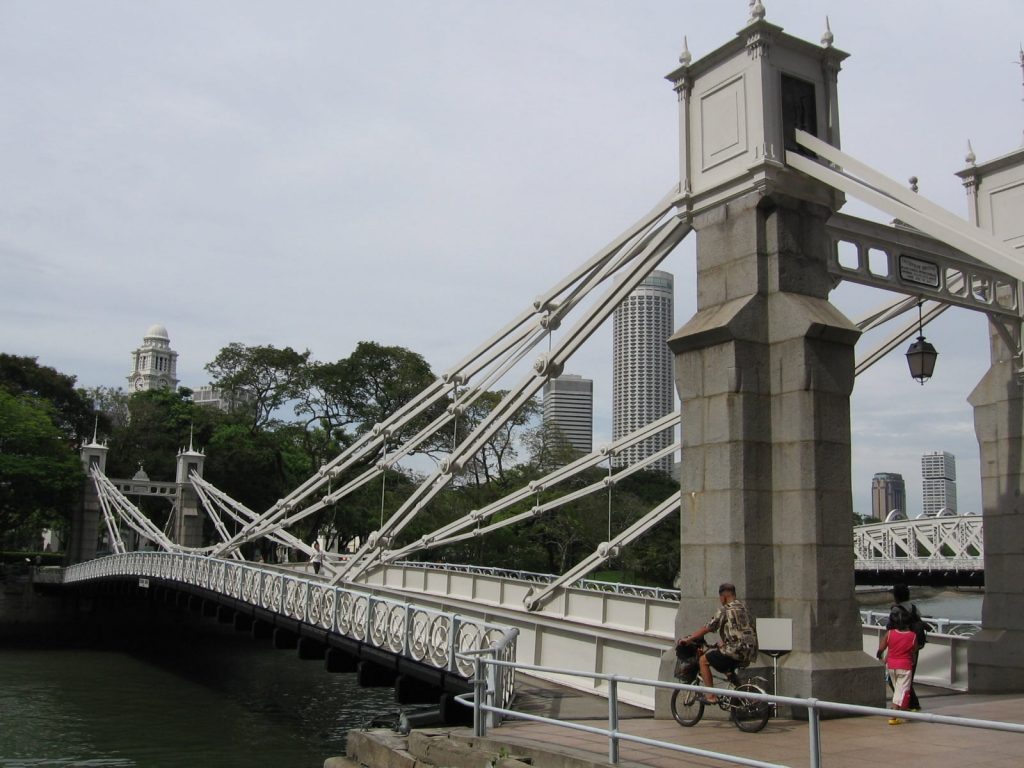 Constructed in 1868, the Cavenaugh bridge is an exciting location. The suspension type bridge is one of the oldest of its kind in Southeast Asia. Spanning 80 meters, it is built across the lower reaches of the Singapore River. The view from this pedestrian bridge is as exciting as its history is enthralling. Its charm is accentuated by the lights that adorn it during the night. 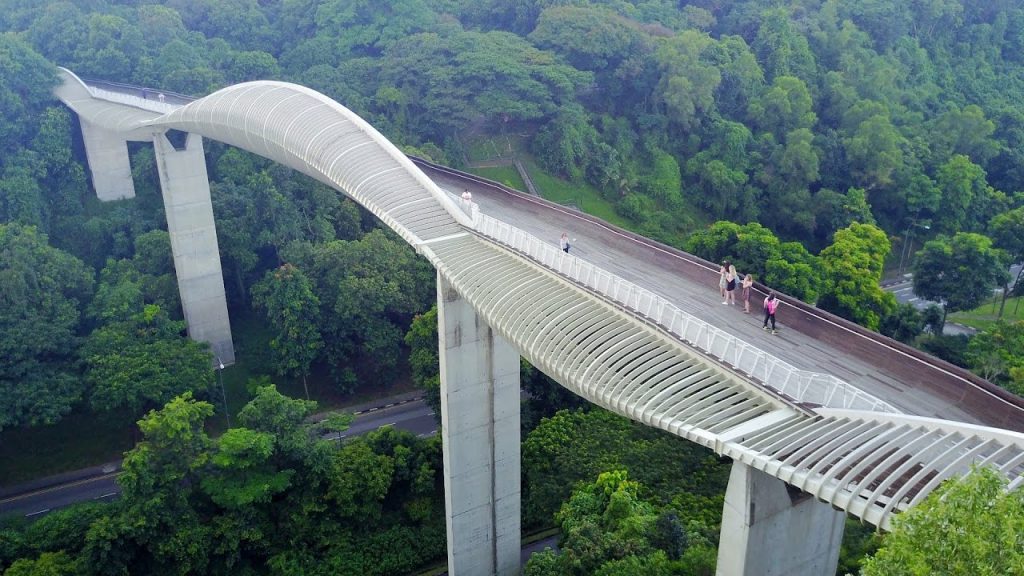 At a height of 36 meters above the ground, the Henderson Waves is the highest pedestrian bridge in Singapore. The amusing construction, which alludes to the waves of the ocean, has ups and downs, curves, and twists. These waves are decorated with ribs, giving them a rugged appearance. Walking through the 247-meter-long bridge is exciting. The beauty of the construction makes it one of the prominent destinations in Singapore. 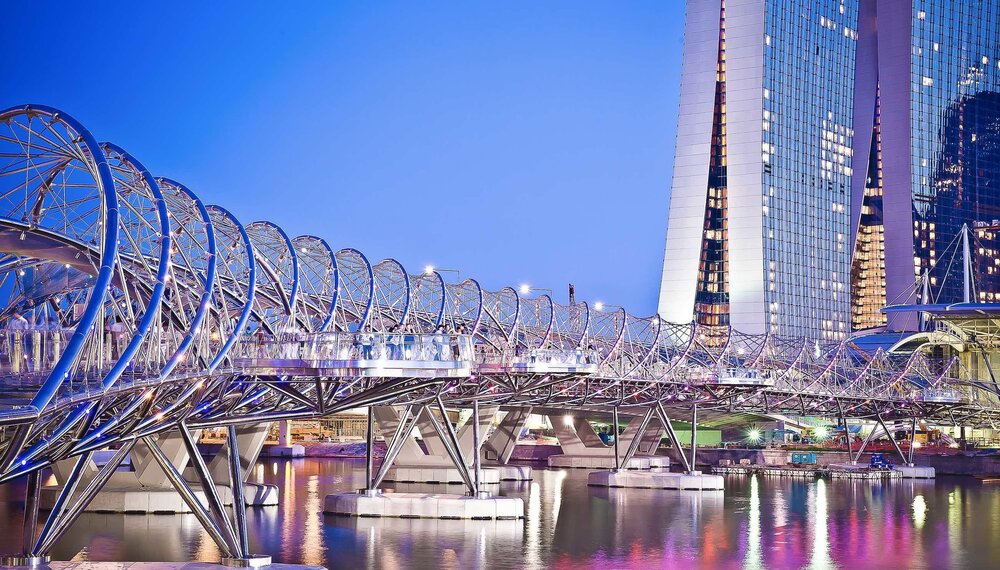 Helix bridge is a stunning architectural beauty that adds color to your Singapore tour. Built with stainless steel, the 280-meters long double-helical structure connects the Marina South with Marina Center. It is also famed as the longest pedestrian bridge in the country. The skyline of the Marina Bay area is visible from this tourist destination. At night, the LED lights come to life and create a psychedelic effect on the visitors.

Situated on the Singapore river, Alkaff Bridge is a beauty you will find nowhere else on an international tour. The bridge that was built in 1997 was later decorated by the Filipino artist Pacinta Abad in 2004. Using 55 colors and a staggering 900 liters of paint, he made the bridge into a work of art. Its inexplicable beauty allures international travelers to the destination. The shape of the 55-meter long construction, which resembles the traditional boats in Singapore called tongkang, is also amusing.

Named after the 8th Earl of Elgin: James Bruce, the bridge is a 46-meter long construction built across the Singapore River. The bridge was built in 1862 and is considered the first permanent bridge in the country. Travelers love to visit the place on the Singapore tour for its historical significance.

Jubilee Bridge commemorates the Golden Jubilee of Singapore. It was opened to the public on March 29, 2015, on the day of remembrance of Lee Kuan Yew. Jubilee Bridge is the favorite spot for photographers as it provides the best vantage point to some of the iconic attractions in the country. As it also provides a great view of the city in lights,  it is visited by travelers at night.

Esplanade Bridge is the best destination for those who love a refreshing walk in the evening. The 280-meter-long walkway is crowded with tourists during twilight as the cool evening breeze, and the crimson shade of the setting sun in the Singapore skyline creates an otherworldly feel. The arch bridge also allows vehicular transport and has four-lane carriageways. 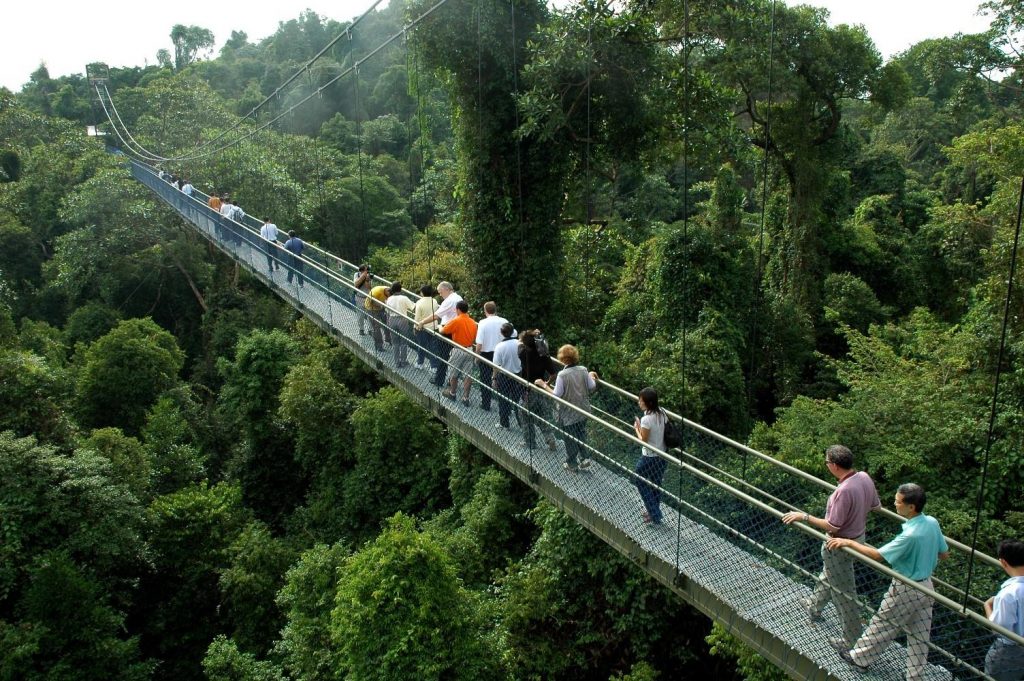 Nature lovers cannot miss the exciting treetop suspension bridge in Central Catchment natural reserve. Hanging at a height of 25 meters above the forest floor, the narrow 250 meters long walkway gives a bird’s eye view of the lush greenery and teeming forest life. Part of the walking trail, the bridge is one of the most adored locations in Singapore travel. Photographers love to capture the exuberant foliage from the high point.

Located in the Palawan beach, Sentosa is a thrilling location for tourists. The narrow walkway almost touches the clear water. Tourists love to watch fishes of many shades happily swimming in the river.  As the suspension bridge is quite shaky, walking through it is a scary experience. Hence many travelers visit the tourist destination to enjoy the thrill.

A decommissioned railway bridge, Bukit Timah is the monument that proclaims the railway history of Singapore. The heavy iron bridge with huge girders is worth a visit. Since it was deemed out of use in 2011, it was converted into a walkway. It was also included under the Green corridor project — a trekking route that connects Singapore’s three national gardens. The spot provides an enthralling view and is hence the favorite spot for a photographer. It is quite difficult to find such a construction, which at once proclaims the history of the railway system and provides a great view, on any international tour.

A mammoth construction, 1.8 kilometers long, having eight lanes of roadways and two lanes of walkways, the Benjamin Sheares bridge is the pride of Singapore. It is built across the Marina reservoir along the southern coast of the country and is 29 meters high. The viaduct design is exciting. Tourists love to participate in the SAFRA Singapore Bay Run & Army Half Marathon conducted annually in the location.

Constructed in 1889, the Read Bridge is one of the oldest bridges in Singapore. The beam shaped structure crosses the Singapore River and links Clarke Quay to Swissotel Merchant Court. Though it underwent renovation works several times, the basic structure was unchanged. The curious design and the history of the bridge make it a prominent location in Singapore.

A historic pedestrian Bridge of Ord is a favored location for those who love a refreshing evening walk. The name Ord is the abbreviation of its previous name Ordinance Bridge. Historically it was also called Toddy Bridge as there were numerous toddy shops in its vicinity. The steel truss structure is amusing and provides a unique view of the Singaporean skyline.

By now, you might have understood that Singapore is not merely a tourist destination housing Merlion statues and skyscrapers. The country has many other surprises in store for those who visit the place as part of their international tour.

Make sure to visit these bridges on your Singapore tour.

8 souvenirs to take home from Singapore

Best Time To Visit Singapore For A Vacation

Cavenaugh bridge is so iconic. This place really come into life later in the evening. One side of the bridge is extremely popular with night clubs, dance bars and seafood restaurants. Great place to hangout.